Before, during, and after Hurricane Harvey, VCA Charities was busy raising funds for what was certainly going to be a tough road ahead for the victims and their pets. While we were working hard for those affected by Hurricane Harvey, Hurricanes Irma and Maria were on track to hit the US over the next few days. Then, unbelievably, Maria came along to devastate Puerto Rico which was still reeling from the damage from Irma.

The hurricanes of 2017 may long be remembered for the destruction they left in their path, but our VCA teammates came together to help by fundraising for VCA Charities animal relief. Together with our Pennies for Pets program, events, and online donations at VCACharities.org, we were able to raise over $200,000.

Working with VCA teammates on the ground and through our shelter partnerships we identified the organizations that would make a significant impact on those who really needed it. The initial fundraising efforts, from August 28 to September 7, were for Harvey where $142,500 was raised.  After that, $57,500 was raised from September 8 to September 30 for Irma and Maria. Below is a list of the organizations VCA Charities helped, what they accomplished during the relief efforts, and what they are continuing to do to help pets and their families.

Thank you to everyone who helped raise money, got the word out and worked together so we can make a positive impact on pets impacted by these hurricanes.

Houston SPCA – $40,000
Immediately after the storm struck, the Houston SPCA’s highly-trained swift-water rescue teams spent eight days in boats rescuing animals from flooded homes. Their 24-hour injured animal rescue ambulances, the only ones in the region, conducted land rescues of abandoned and injured animals, and they established a MASH (Mobile Animal Shelter) in Jefferson County. Following Harvey’s landfall, the Houston SPCA has cared for over 2,300 dogs and cats, over 80 displaced horses, farm animals and native wildlife.

As of October 6, 2017, 305 Harvey victims found safe, secure foster care in veterinary hospitals and 243 animals, including over 40 horses were reunited with their original owners.

“This is absolutely incredible and we are profoundly grateful for your kindness and the support of VCA Animal Hospitals throughout the U.S. and Canada. We are thankful for this amazing gift and for all that you do for the Houston SPCA and the animals we protect and save. Thank you again for helping us give the animal victims of Hurricane Harvey a chance at life!”
– Stacy Fox, Director of Donor Engagement, Houston SPCA

SPCA of Brazoria County: – $40,000
The SPCA of Brazoria County, cared for the pets within their shelter, about 1hr away from Houston. Their actual facility helps about 4,000 animals but saw an increase in animal intake following Harvey. There, on the first few days of the hurricane, they received hundreds of dogs, cats, pigs, goats, as well as chickens and horses.  During Harvey, they also set up a temporary shelter at the local fairgrounds. They are continuing to make sure they save as many lives as possible.  Our donation will be able to replace multiple refrigerators that were destroyed from the Hurricane where they stored necessary medical supplies to care for these pets.

“Thank you so much to Dr. Low for volunteering with us during the storm. We truly appreciate this gift and the support of VCA.”
– Stacey Suazo, Executive Director, SPCA of Brazoria County

Citizens for Animal Protection (CAPS) – $20,850
In preparation for the storm and possible flooding, CAPS assembled a team of dedicated staff members to stay at the shelter around the clock to care for the animals and to move them upstairs in case water approached.  This team remained on property for 7 days, riding out the storm and the immediate aftermath with the animals in their care, and made themselves available to assist the public if needed.  Fortunately, they did not flood – though their immediate surrounding area did, which left them as a virtual “island” for several days.

Once the road flooding receded, CAP assisted with caring for lost animals and reuniting them with their owners.  Through donations made by generous corporations like VCA Charities and individuals of food, medications, crates, leashes, cleaning supplies, and other pet supplies, we were able to distribute these necessary items to families, smaller rescue groups and shelters in need, including NRG stadium, the designated center for lost animals.

Austin Pets Alive! – $20,850
Austin Pets Alive! (APA!) has taken in over 3,000 dogs and cats in peril for their lives during its response to Hurricane Harvey, and that response is ongoing.  Some 2,200 pets were transported to Austin into the direct care of APA!’s staff, volunteers and fosters.  Another 1,100 have found safe haven at the organization’s temporary emergency shelter in central Houston, where families facing the devastation to their lives are still surrendering pets they can no longer care for.  Those Houston cats and dogs are being transported on from the APA! Houston facility to no-kill shelters all across the country for adoption.

“This is overwhelmingly wonderful! Please know how grateful we are for ALL that you and VCA have done for Hurricane Harvey survivors and Austin Pets Alive! You seriously have helped us so much!”
– Dr. Ellen Jefferson, Executive Director, APA!

Austin Humane Society: $20,850
The Austin Humane Society was able to answer the call for help during and after Hurricane Harvey for hundreds of animals across Texas. Over the course of their response, they helped more than 550 animals. The team at AHS treated evacuated pets living in Austin’s shelters, provided transportation for other shelters in order to get cats and dogs out of the storm’s path, and took in evacuees from along the Texas Coast.  AHS also took over the long-term care efforts for nearly 200 dogs who had been rescued from Harvey’s destruction. They worked to reunite the owned animals with their families and are now working to find the others their new forever homes.

Humane Society of Broward County – $36,250
Before, during and after Hurricanes Irma and Maria, the Humane Society of Broward County (HSBC) provided care and assistance to more than 1,100 animals. They transported animals out of the south Florida area so they would be out of harm’s way and accepted 60 animals from the mandatory evacuation area of Marathon, Florida. They also assisted in caring for approximately 300 animals (dogs, cats, birds, and ducks) at the only pet friendly evacuation shelter in Broward County.

Post storms HSBC has accepted dogs and cats from Puerto Rico and provided pet food and medicines to shelters in the Florida Keys and in Puerto Rico.  HSBC has also collected humanitarian items and food for the people of Puerto Rico.

They, along with Wings of Rescue, GreaterGood.org, and the Humane Society of the United States, has been transporting humanitarian aid items for the people and pets of Puerto Rico since September 25, 2017.  Each daily flight is loaded with up to 5,000 pounds of human and animal items and to date, more than 25 planes have been loaded.

“Thank you to VCA for the much needed Hurricane Relief funding and your help with the Hurricane Harvey pets!”
– Kathy Tricomi, Sr. Vice President, HSBC

PetRed – $21,250
PetRed’s outreach efforts target underserved areas. Their approach of targeting pet overpopulation in these areas is an approach that has been successful in many other communities across the United States, and should prove successful in Puerto Rico.

VCA partnered with Hills to have 7,800lbs of Hill’s Science Diet put in a shipping container with the help of PetRed to be distributed to pet owners in Puerto Rico starting October 15, 2017. PetRed has organized with Movimiento Social pro Bienestar Animal (MOSPBA) in Puerto Rico. This organization is responsible for picking-up the food from the shipping port and delivering the pet food to locations already identified in need of pet food. Some of these locations will be human shelters with pets, animal shelters and some animal rescue groups.

“Let me start by saying THANK YOU! Thank you for support and your generosity in helping the people and pets of Puerto Rico.”
– Jorge L. Ortega, Jr., PetRed.org 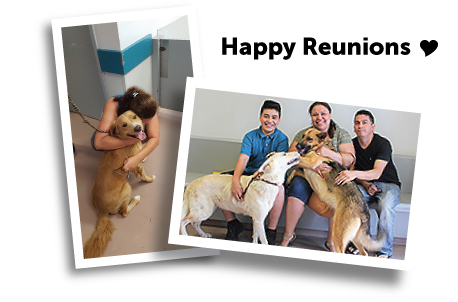 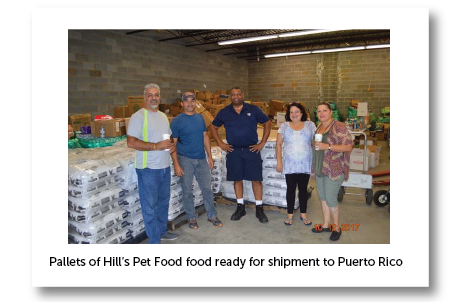 How You Can Help

Every dollar makes a difference in the lives of vulnerable pets by helping them find and remain in loving homes. Join us in making a better world for pets today through a tax-deductible donation.